Clay Nash, Prophet to the Nation 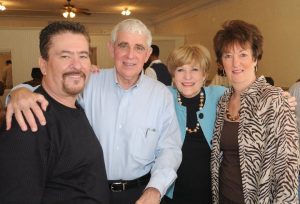 Where do I start?

My husband and I have known Clay and Susan Nash for many years – and their friendship has been invaluable. They ministered at the church we founded in North Mississippi and we have had the opportunity to minister at their church. They have been mentors, but much more. They have been true friends.

I don’t know anyone who has been busier than Clay and Susan, but they always have time for a word, a prayer, or some much-needed advice. Like I said, true friends.

So what keeps them so busy?

First and foremost, they stay busy stewarding City Gate Southaven, the remarkable church they founded in this Memphis suburb. From there they have raised up a healthy, spirit filled group who minister – not only to the surrounding area, but also to the territory and to the nation through his affiliation with Dutch Sheets and NEI. He frequently speaks in conferences – and leads prayer initiatives throughout the nation.

From this first City Gate, he has helped others spring up in Georgia, Arkansas, Mississippi, Tennessee and Louisiana. Leaders and prayer warriors are being raised up and activated to fulfill their part of God’s call. One of Clay’s emphases is not only to prophesy, but to teach others how to hear God’s voice for themselves.

Over the years, Clay has ministered in Africa, Eastern Europe (even when it was behind the Iron Curtain), and other areas of Europe. Today he frequently ministers in Brazil and in England.

In 2015, the Lord led Clay and Susan to begin a “Hope Tour” across Arkansas. Each month they held a gathering in different cities around the state – drawing local churches for worship, prayer, and evangelism. As they stirred up the gifts in the local areas, the people were energized to fulfill their call.

Now the team is conducting meetings in Mississippi for the same purpose. Through these meetings, Clay, Susan, and their team have impacted the entire territory, including Mississippi, Tennessee and Arkansas.

Now for the latest.

There is never a lull for the Nashes. Clay and Susan are purchasing acreage in northwest Arkansas (close to Missouri) for a ministry center. As Clay was contemplating the plight of inner city boys and girls – and their deprived environments, he felt the Holy Spirit’s nudge for him to do something about it.

The ARK will be a blessing for these children. The vision is to have training camps for teens. Not only will they be exposed to the gospel – maybe for the first time – but also they will have the opportunity to learn skills which are unavailable in the crowded metro environment. Working with tools, carpentry, building furniture, repairing cars, and even learning skills related to gun safety, camping and outdoor life. Skills which will enhance their self-esteem and sense of purpose.

Having grown up in a small town in Arkansas, Clay learned many practical skills as he helped his Dad and uncles in their array of businesses. These skills included selling and repairing farming equipment, crop dusting, and skills related to the many facets of the trucking industry. In addition, he grew up with an appreciation for the joys of hunting.

Though Clay now has achieved recognition as a prophet and teacher of the Word, he has never lost an appreciation for his roots and all that he learned in those years growing up in Arkansas. Perhaps that’s one reason he wants to share with more deprived teens the joys of good honest work – and the satisfaction of a job well done.

In a day when some ministers are trying so hard to make sophisticated impressions to the world, you won’t find that in Clay. As Dutch Sheets says, “Clay and Susan Nash are the Real Deal.” No pretenses here. Just two people who are totally sold out to God and walking in who they are. The people God created them to be. Powerful prophets, for sure, but true down-to-earth friends to those who know them well.

As a result, when the Nashes hold their yearly conference in Arizona, they more than likely will make the trip across country on their Harleys – with full regalia of leather jackets and bandanas. While “undercover” in this manner, they have been able to minister to other Harley riders who had been turned off to church as usual.

Clay and Susan Nash are truly remarkable people. They embrace the grace God has given them and they walk in it boldly.

Jesus said , “You judge a tree by it’s fruit.” If you stick around Clay and Susan long enough, you’ll see plenty of fruit.

In great appreciation of these dear friends,

You may find out more about the ARK at ClayNash.org. While there, be sure to order his latest book, Relational Authority.