When The Righteous Are In Authority, The People Rejoice. 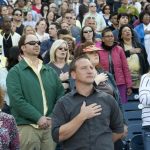 “When the righteous are in authority, the people rejoice.” Proverbs 29:2.

Today is the day to make your voice be heard in our great democratic republic. Sometimes people may think that their voice doesn’t count.; it’s just one of many. But throughout history elections have been won by a few hundred votes. Remember the 2000 election? A virtual handful of votes in Florida decided the outcome. Just think if those few hundred had not voted, what would the outcome have been?

I have included some great historical quotes furnished by http:www.wallbuilders.com. They will inspire you to fulfill that great public trust we have been granted.

Pray and choose well. Then vote!

[Matthias Burnett, Pastor of the First Baptist Church in Norwalk, An Election Sermon, Preached at Hartford, on the Day of the Anniversary Election, May 12, 1803 (Hartford: Printed by Hudson & Goodwin, 1803), pp. 27-28)