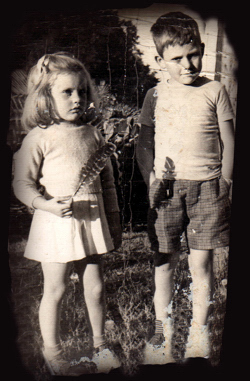 I want to tell you about George.

He’s my big brother. When we were children, growing up on the coast of south Georgia, I thought he was the greatest person that had ever lived. In my eyes, he knew everything, and he could do anything.

George was the one who tau

Sure, he would stick me in the closet and dangle cockroaches in my face, and he would say things like, “Does your face hurt? Well it hurts me to look at it.”

But he didn’t mean any harm, he was just having fun.

He was my big brother.

Every now and then George would get into trouble because of his playfulness. Like the time he demonstrated his infatuation with Imogene by throwing pine cones at her. Her mother didn’t like that very much.

Then there were the times when the teachers would call and say that George was talking and laughing too much in school. He was disturbing the class.

But he was always having fun. That was George.

George would often get me to help him play pranks. One year Santa Clause brought him a movie projector for Christmas. One of the films which came with the projector had a slow motion spot in it. When we were showing the movies to friends, he would get me to say at the right time, “George, show it in slow motion.”

The friends thought that the projector was especially advanced. If they asked later to show something in slow motion, he would say, ” That part doesn’t look good in slow motion.”

As the years went by, George remained George. He did well in school, but his playful nature continued.

Then there were some surprises.

He surprised me when he came home from school in 9th grade and said that his choral director wanted him to sing a solo in the upcoming concert. I didn’t know that George could sing especially well. He then stood up at the end of the dinner table, and boomed out “Ole Man River,” astonishing all of us.

He had a beautiful voice! What a surprise!

Another surprise came when the senior-in-high-school George came home one night, his eyes shining from tears, to announce that God had called him to preach. We had been attending some revival meetings, and he had felt God speaking to him. He then had taken it upon himself to visit the evangelist at his motel and solicit his prayers. My parents, my younger sister, Ruthie, and I all surrounded George, hugging him and congratulating him.

All of us cried, because this was a big moment.

Soon after, George was accepted at Emory University, and received a ministerial scholarship. Before he left for school, our pastor asked George to preach one night at church. His sermon was very short, but profound. He preached on “mountain-moving faith,” from Mark 11:23-24. This was years before we had heard of Kenneth Hagin. I never had heard a sermon quite like that.

He was truly full of faith!

Back in those days, we didn’t know about spiritual warfare. We just took what came our way, and trusted in God, so we were blind-sided by what happened to George at Emory. George’s behavior became very erratic.

George seemed to stabilize the next year at a junior college, and then he entered Georgia Tech.

My brother was 24 years old, and studying aeronautical engineering at Tech, when tragedy struck. He started having blind spots in his eyes and lack of muscle control. The diagnosis came of a debilitating disease, and within 6 months, George could no longer walk. He had the best doctors from Emory University, but little could be done for him.

The next 13 years he spent with my parents, his health continually degrading until he died at the age of 37.

I’m not one for sob stories, and I have never written about this. In fact, I’ve seldom even talked about it. But I think that there are some things I needed to share.

Do I think that God’s will was for George to be sick? Absolutely not!

But even when God’s perfect will is not being done, He brings good out of the sorrow.

First, my parents throughout those 13 years showed incredibly unwavering devotion to their son. Their home was not one of gloom, but of laughter and joy. But they sacrificed totally for George’s welfare during that time.

I have heard many people since say that the demonstration of Christian love shown by my parents caused them to turn to Jesus. They too wanted that kind of character, which could only come from Christian love.

Secondly, God’s work will go on with or without individuals. Two years after George died, I came to the Lord in a new and powerful way, receiving the baptism in the Holy Spirit and a new understanding of God’s work on the earth. A few years later, God called my husband and me into the ministry.

This may sound strange to some, but I truly believe that God passed the torch of George’s call to us. There was a work to be done, and He wants us to fulfill it.

Thirdly, the soul-searching  – and truth-seeking –  I did after George’s death, made me more determined than ever to take all the wraps off of the Gospel and press toward the greatest manifestation possible of God’s love and power in the earth. So many times when someone encounters a disappointment in their personal life, they are tempted to build a doctrine around it. (i.e.George didn’t get healed, so healing isn’t for today). But I am determined not to go that route.

I know where George is. He is in Heaven, in that cloud of witnesses spoken of in Hebrews 12:1. And if he could talk to me today, he would say, “Go for it! Run that race!”

I am determined not to let my life on earth be stopped in its tracks by hurts of the past. I have my own race to run, and I intend to do it.

After all, our time on earth is like a point at the beginning of a ray which extends forever. (You know, “to infinity and beyond”). The time here is short, and I want to make the most of it. I will see George again, along with my parents. (I hope there aren’t any cockroaches in Heaven).

In the meantime, I will run the race set before me.

Maybe you have had some disappointments. If so, I want to encourage you not to let that stop you from the life God intends for you.

Our God is a remarkable God. He can and will heal every hurt in a way that seems impossible, and He will let you learn some lessons even from the pain. Those lessons will allow you to take the reality of His love to others in a way that you never thought you could.

I’m striving for the higher call of Christ.

How about you? I know that you are too.