I Want To Take The High Road 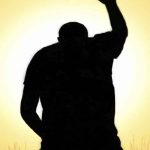 William Booth grew up in Nottingham, England during the mid 1800″s. Born to a family that had lots of wealth, he knew what it was like to have all the material things he desired. However, when William was 13 years of age, his father lost the family business and they were suddenly broke.

Not having any money for his education, the lad went to work as an apprentice to a pawnbroker in a “seedy” section of London. That is where he gained a desire to help the “poorest of the poor.” In 1852, William left the business to become a minister.

There was much opposition to this ministry. Many religious people were offended that he was helping the “rough” people in the name of Christ. In fact, he was often attacked physically by those who were offended, many times suffering wounds inflicted by them. He had many opportunities to stop his work, but an inner strength drove him to continue. To those offended, he returned only kindness.

Just a few months before his death in 1883, William Booth made his last speech.

And he did. William Booth lived a life of the High Road Principle. He lived his life following the inner voice of God, and no one could stop him. When he received evil treatment, he returned kindness. Although he had a crowd of hasslers who followed him everywhere he went, he never fought the people. He went about his business doing what God had called him to do, and he continued to help the “worst of the worst.”

Now his organization is a world-wide ministry, and very well-known for its generosity in times of need. When Booth died, he had no idea that he was launching such a huge plan, but he knew that he was following the call of God for the people of his day. And he never gave up.

When I encounter such dedication, such kindness, such determination, I am humbled and inspired, aren’t you? We can look around us today and see so many people who need us. They need Jesus, and they need us to help them make the transition. Sometimes the people may be victims of hurricanes or other natural disasters. Other times they are victims of their own evil habits. But either way, they need Him and they need us.

Just thinking about this makes me want to do more.