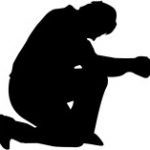 How do you define a Christian? We all have our preconceived ideas. Of course they have to believe in Jesus Christ and receive Him as their Lord and Savior. That goes every time. But what about the rest?

But is that all? Is everyone that way? What about Mark?

Mark is a man who is now in his seventies and had never been in a church until about four years ago, when he came and prayed to receive Jesus. His wife passed away much earlier, and he was very lonely. He lives in a small mobile home at the edge of the town with his grandson, whom he raised. (Now the young man is in his mid twenties, but he doesn’t work and counts on his grandfather for support).

Mark is a quiet man, but every now and then he’ll tell a story which gives us a glimpse of his life.There is a reason that he never learned to read. When he was in the second grade, his father took him out of school so that he could help with the farm chores. (They were sharecroppers). He worked hard, long hours on the farm. But that’s not all that he did.

His grandfather was a moonshiner. He had a still back in the woods, and when the old man had an order, he would have Mark travel by foot to deliver the brew. It was risky, so the young boy learned how to look out for the “law.” On occasion he might have to duck into the edge of the woods, so as not to be seen. This grandfather was a hard man. If the young lad didn’t make it back in time for dinner, he wouldn’t get his food. Food was served twice a day, and anyone not around for the meal would have to wait until the next one.

Mark later got married, had children, and raised a family. Over the years, his farming and moonshining gave way to factory work. He worked at a local plant, running machines, and doing janitorial work. His attendance record was almost perfect. One of his greatest possessions was a jacket which he earned as “Employee Of The Year.”

Mark told me that while his wife was alive they would “fuss a lot.” He feels bad about that. He says that “he didn’t always do what he should have done.”He’s glad that he can pray and that Jesus has forgiven him.

He has been retired a few years, but Mark still does odd jobs. And he walks. He walks several miles a day – sometimes to the store, to a working assignment, and sometimes to church. He loves to work and he loves to walk. It makes him feel better.

Mark doesn’t bring a Bible to church, since he can’t read it. But every Sunday, for the last few years, he has sat on the front row on the far right of the church. And every Sunday, he has listened attentively as sermons were preached or testimonies given. His heart is tender, as he kneels and prays at the altar. He wants to “keep things right with God.”

We need to broaden our perspective. We need to realize that out there – in the masses of people who throng by every day, there are other Marks. They might not look like they would be interested in Jesus. And they might not act like it. Yet within their hearts is a desire to connect with their Maker and to connect with the truth. They want to know what the Bible says, and they want to learn how to pray. They might be outside of the box we expect people to be in, but they are not outside of the box in Jesus’s eyes.

I don’t know about you, but I want to look for more of the Marks. I am asking God to open my eyes and ears to see and hear what he wants to tell me so that I can reach others who are seeking the truth. I’ll try not to judge by what my natural eyes see, but I will try to judge by my spiritual eyes.