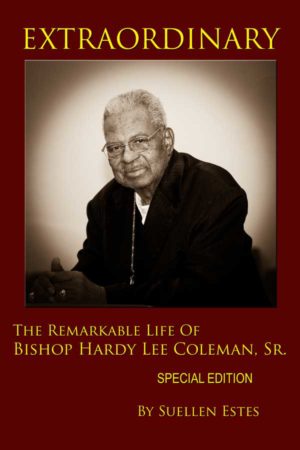 “What were the characteristics which caused your parents to be such great parents?” I asked. I was sitting at my dining room table with 6 of Bishop Hardy Coleman’s children, chatting about their life growing up. (Two of his children had gone on to be with the Lord).

The huge amount of responsibilities brought on by several thriving churches and the hard secular work necessary to provide for a large family never kept Bishop Coleman from showing his children the love and care they needed. He was always there for them, involving them in the ministry and the secular work whether it was farming or carpentry.

It was obvious that God’s hand had been upon their lives. All of them were now involved in God’s work to some capacity. Several of his children and grandchildren were ministers.

Certain  things stood out as we chatted.

One, the Coleman home was a home of love. “Our parents loved each other unconditionally. They respected each other. There was never yelling in our home – at each other or at the children.”

Even when disciplining his children Bishop Coleman would show kindness. He was strict because his standards were high, but they always knew that the discipline was for their good. His love shown through even during the toughest times.

Secondly, Bishop Coleman and Ezera had an excellent manner of instructing those under their care. Bishop would take the time to teach and train his children – not just in spiritual things, but also in work skills. He always explained why there were certain requirements. While doing carpentry, for example, the sons learned skills which set them up for good positions later in life.

Thirdly, the Colemans were “totally real.” They didn’t teach one thing at church and live another way at home. They were consistent in living their lives for God – whether anyone was watching or not. Because of that quality, the Coleman children were able to “catch” many attitudes which would benefit them later.

Fourth, the Colemans were full of faith. When the teenage years hit and some rebellion arose, Bishop Coleman and his wife were faithful to pray. There was one season when one of the teenagers strayed away for awhile. During that time, Bishop Coleman had a chair which he had sitting close to him during every church service. It was a chair for the prodigal son when he returned. And return he did. The prayers of a righteous man avail much! (James 5:16).

Fifth, one attribute of Bishop Coleman which stood out to his children, was that he was unstoppable. Over the years there had been disappointments, as there are in any significant life. People had betrayed him. From time to time, finances had been lean. Churches had split because of arguments among the congregation.

Yes, Bishop is a remarkable man – and he has a remarkable family. All of them have been touched by God – and all of them show the blessing showered upon a man and woman who were so faithful to Him.

P.S. You may check out Extraordinary: The Remarkable Life of Bishop Hardy Lee Coleman, Sr on Amazon. http://www.amazon.com/Extraordinary-Remarkable-Bishop-Hardy-Coleman-ebook/dp/1503111725/ref=sr_1_1_twi_2?s=books&ie=UTF8&qid=1424964862&sr=1-1&keywords=suellen+estes